I have several hours of video from my solo Atlantic crossing, and have been too busy to create a video of this 2nd leg of my sail from Gosport to Corpus Christi, Texas.

Four years and three months ago I was heading to Tortola, BVI. I came across a short video clip, and turned it into this short message relating the solo sailor to starting up a business: there are many talented sailors, but only a few are “the willing”. Likewise in business.

It is not really a “Frank-Just Frank” video, but without Frank I would not have been there. BTW, I never did get to Tortola, heading instead to St Croix, where I immigrated to the USA and parked Frank for a few months at St Croix Marine 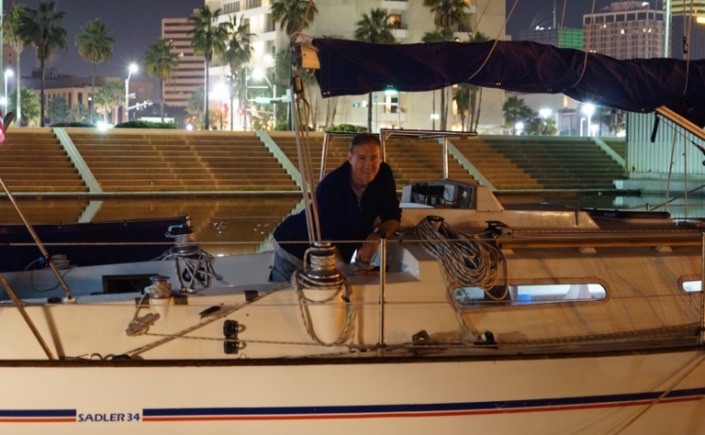 Working on the boat – last night, Thanksgiving Day night – was very still, so I took these pics of Frank. I am Thankful for Frank! 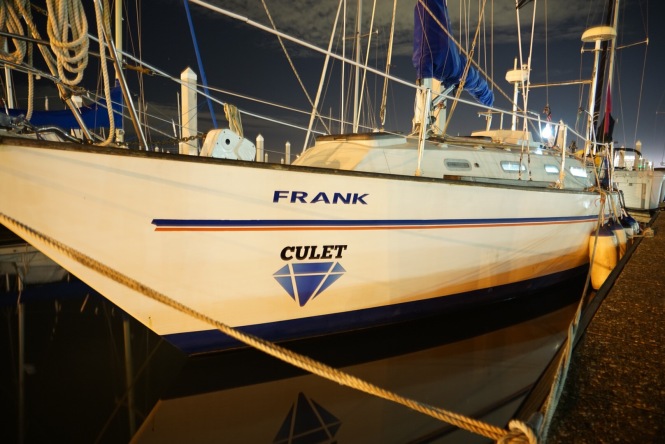 To be USCG (US Coast Guard) compliant, I had to either fit a holding tank or sling the heads before entering US waters. Some Sadler 34 owners have fitted custom holding tanks behind the toilet, in the heads compartment. To get the job done simply, and more economically, I opted for this unattractive approach:

The holding tank is from Tek Tanks of Alton, Hants in England. They have a database of custom tanks for a load of boats, based on previous projects, but I will stick with the current setup for a year or so.

The plan is to hide it behind a wooden shell, made to look like a cabinet. This bulkhead is the driest part of the boat, so I will add a storage space to the right of the tank, (looking at it), for charts, manuals, documents etc. The loss of space would be a pain if there were four or five crew, but it is fine for one or two.

As an aside, my log was completely ruined after crossing Biscay in November 2014. It was “safely” stored in the desk, and water poured in through the leaky port above the desk, as well (I think) as through the open hatchway when a few massive waves snuck up behind me and took out the sprayhood. I then discovered plastic paper log books, which work great with pencil, and are resilient against sea, rain and flood.

I have ordered a Non-contact tank level sensor, from New Providence Marine. It means that I don’t have to fit a mechanical device inside the tank. It comes with a gauge which I will install in the heads compartment, warning people not to flush the loo if the tank is full.

The sensor has two foil strips running vertically, 3″ or 4″ apart, down the outside of the tank. I think it will have to be fitted to the rear of the tank, against the bulkhead.

[When I first bought her, I could not find the holding tank (it was a crappy hand-over). I called or texted from the Irish Sea and learned that there was none. This explained why it was backed up.]

The tank takes up valuable foot space when sleeping in that bunk, unfortunately, but it will be fine for someone 5’8″ or less. And, of course, a place at the dining table is sacrificed, but for the next year or so, it will do. Especially if it is disguised as a cabinet or cupboard!

ON 1272125, the new Official Number for Frank, has been assigned by the Coastguard. Once I receive the Certificate of Documentation, I can strike the Manx Red Ensign and hoist the Stars and Stripes!

I will need to have the new port, Corpus Christi, TX, put on the stern, to replace Douglas, IoM. And I need to permanently add the new O.N. to the boat.

Matt from Coastal Bend Yacht Services made and put the new sail cover on this week.
Frank looks a lot better! Plus, of course, the mainsail is finally getting some protection from the sun. [Update: the lazy jacks are on too. Adjustable at the mast, so they can be dropped out of the way. My original cover/stackpack was torn when the jacks caught in the battens]. 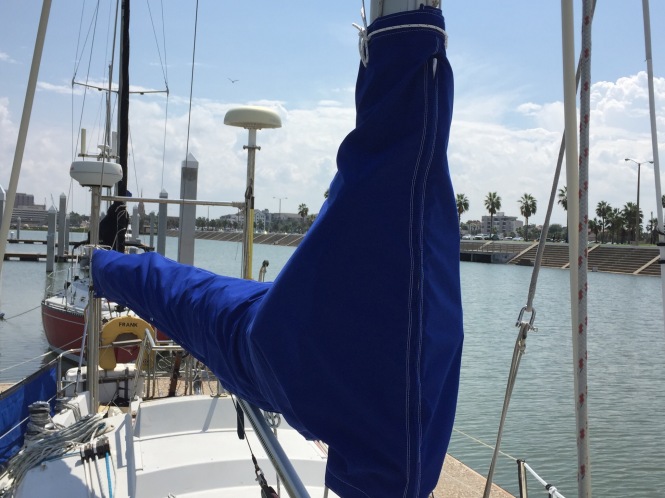 Zipper at the mast

I decided against a Stack Pak -$700 to save taking the cover below decks seems poor value for money. Next week the lazy jacks go on.
I met Matt’s wife when I called in at their shop in Corpus – lovely lady. I bought 50 feet of 1/2″ mooring line to go with the new rope floats that I bought. 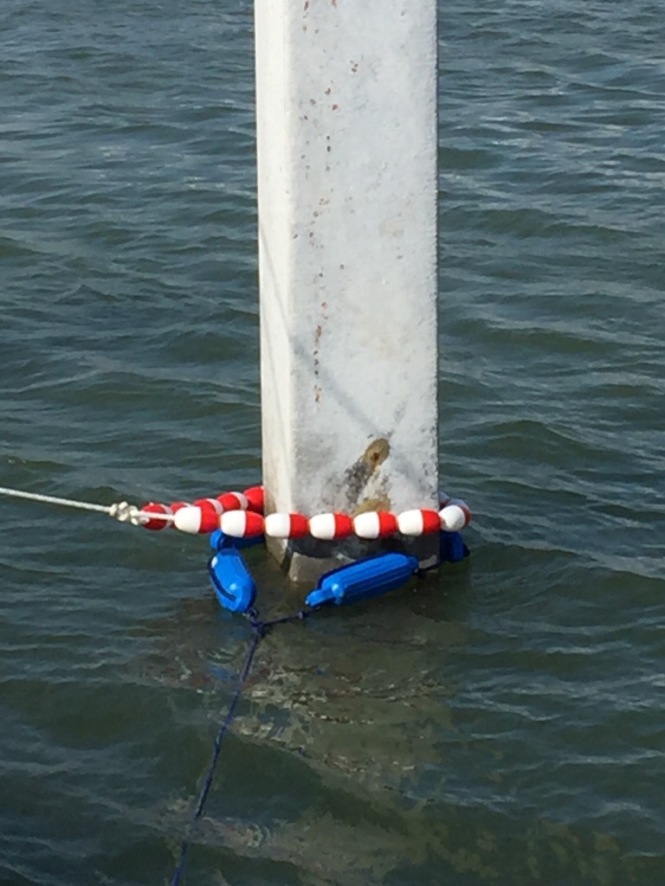 Because Frank is on a floating pontoon, I need a way to tie up to the pile in the pic. So I am experimenting.

It is probably overkill, but in case a storm hits (this is hurricane season..) I need a way to give Frank maximum security, especially if I can’t get there in time to move her or double up the lines.

So I bought 20 of these floats and threaded the line through 18 of them, and lassoed the pile. As you can see, they sit on top of the blue fenders that I put there last week.

The idea is that the lines will rise and fall with the tide, whilst still holding Frank in place. Even if the blue fenders snag, the bow line should float freely. Should…

The newly installed Windex greeted me today, on deck.

I was surprised that it had been blown off. Mark explained that the birds (big buggers, not gulls) break them off, because they like a comfortable perch atop the mast! I wonder how long my yet-to-be installed Bluetooth wind instrument will fare..

I also took the new rails to Frank but have not installed them.

Out of the water for the hurricane season 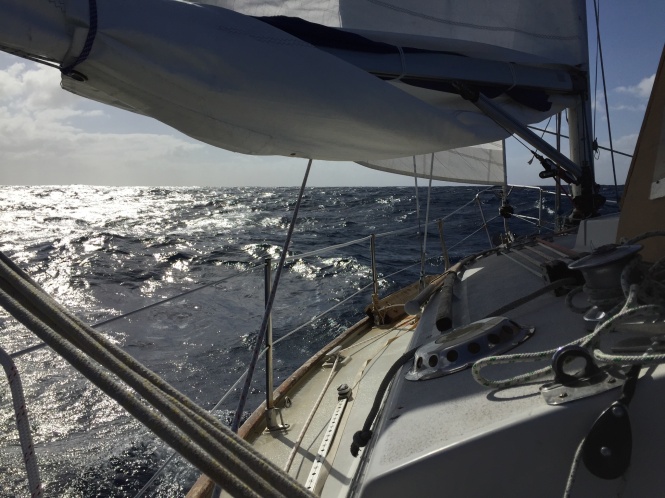 After parking up in St Croix in March 2015, I had a couple of days to get things half tidied up and then headed to Austin Texas  for work. So this week (11-14 Oct ’15) was the first opportunity that I had to get back to Frank in seven months.

I still have to update the blog to cover the journey and stuff that has happened since then.

I completely lost track of doing the blog!
Quick update – missed the ARC due to persistent engine issues, caused by shorts in the wiring. Four dead shorts resulted in lots of melted wiring.
I had to park Frank in Camarinas, NW Spain, November through January, so that I could go take care of business, once I decided that ARC was not achievable.
I returned late January to more burned out wiring – the engine had been running with the starter motor on, due to another short. Fortunately, only the (brand new) starter motor was burned out, not the boat. Even better, I had brought with me a new wiring loom.
Anyway, I departed Camarinas Feb 5 2015, stopped briefly in Porto Santos off Madeira on 12th to retrieve the halyard, and landed St Croix, USVI, sunrise on March 8th 2015.

Frank was finally registered as Frank with the Isle of Man Register of Shipping, Official Number 701429. The number stays with the vessel for life (life on the British Registry, that is).

So Geoff crafted an official number, which is now affixed just under the hatch!

The number is referred to as the carving, as it would originally have been carved into the main beam. Not being wooden, or course, I have compromised and used epoxy.

The white thing with the two red circles is the holding tank, pre-installation. With help from Geoff, it is now installed and partially piped. Some trimming and adjusting required. The sanitary pipe is a bitch to work with, unless you but some better pipe at £27.50 a meter, say $15 a foot. Six feet later..

I ran out of time getting the extraction and vent pipes installed, and the anti-siphon pipes look rather untidy at this stage. But it is progress! 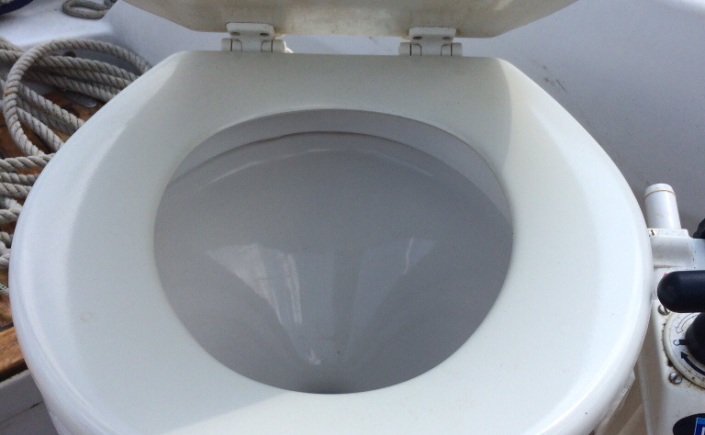 In the process of installing a holding tank, I had to scrub out the heads. It turned out cheaper to but a new loo than to replace the seals and valves.

Frank has a Raytheon Autohelm, which is integrated to the GPS and allows a course to be held and modified. It was upgraded by the previous owners from a device which controls the tiller to a ram which is connected to the rudder quadrant.

These devices are not good for sustained use, because of their power consumption and inability to work under pressure in heavy seas. Besides, it is a bit flakey, and the wiring came undone halfway through my sail to Gosport.

Whilst I have fixed it, this is not a good solution for long distance sailing. So I invested in a Hydrovane, more info here

Craig Grantham, who rebuilt the engine, installed it, with a little help from me. Pics below.

The Hydrovane requires no electrical power: it have a wind vane (a sail) above the water, and a rudder below water, and it uses these to keep the boat at a set angle to the wind. It was a big investment, but I think it will pay off by taking the strain of driving Frank across the Atlantic. Most customers report that their Hydrovane does 90% of the work! 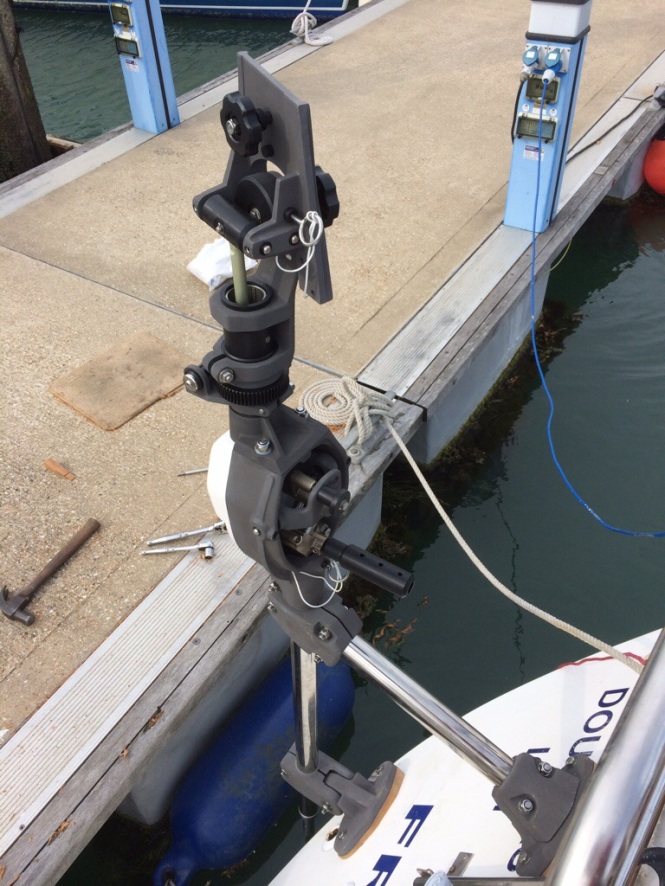 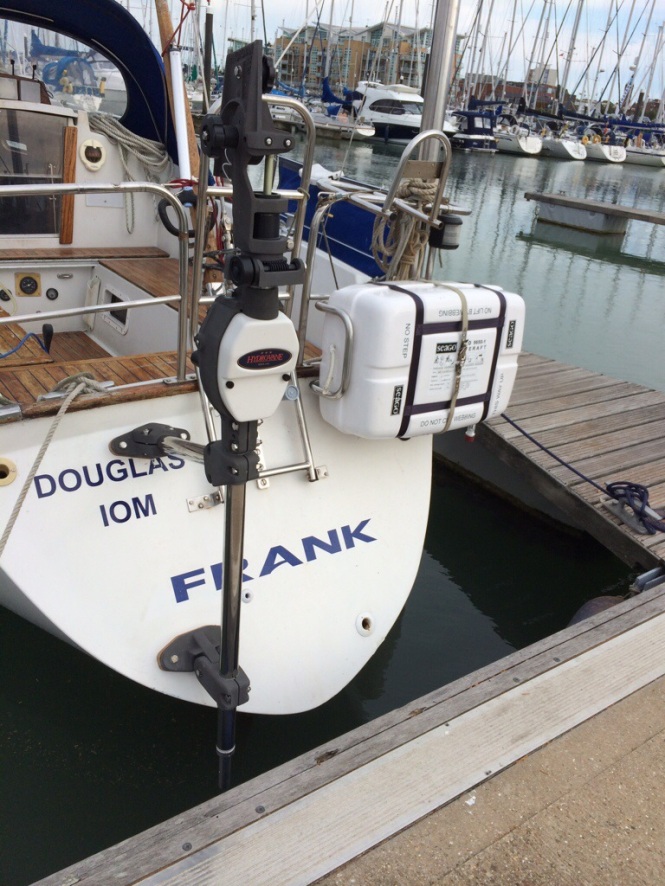