I have received the paperwork from USCG, recording Frank as a proud member of the US Pleasure Sailboat fraternity! Before I am fully compliant (and compliance is a big, big thing with Uncle Sam) I have to do some stuff.

The docs that I have received enabled me to register Frank with the State of Texas, which clearly needs my taxes, so I paid the $125. Cash only, please. No debit or credit cards. The ladies in the Kerrville Parks Office are delightful, and very helpful. I now have two stickers to adorn the bows.

I have to mount the new Official Number inside the boat, just like the “carving” that British yachts are supposed to have, in a manner that will make it obvious that it has been removed should that be done.

3 inch letters, preceded by NO. Not too subtle. I have been mulling this over, and decided to do the new “carving” (as you know, so-termed because it would have been carved into the main beam) in plastic.

Here are some pics:

To make the numbers I bought some 3″ aluminum (aka aluminium 😉 ) door number signs, which would act as moulds for 2-part liquid moulding plastic. I also bought some modeling clay, and small wooden letters N and O.

Here is the plastic. Fast setting and easy to use. Just mix and pour into the mould.

I made the NO by pressing the letters into a lump of clay, butting the NO up to the numbers plate once it was made, and pouring on more plastic. For some reason the color is slightly different. I was hoping to leave the plastic background unpainted as it is similar to the color of Frank’s saloon. I will see how it looks next time I get to the boat. 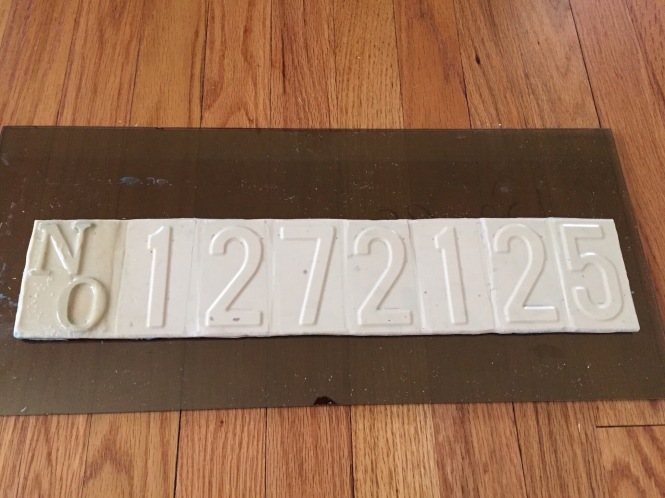 Some black paint on the raised numbers and letters, plus a colon, gives me the Official Number plate. I will border it when it is mounted, with some teak. Where to mount it? Hmmm. 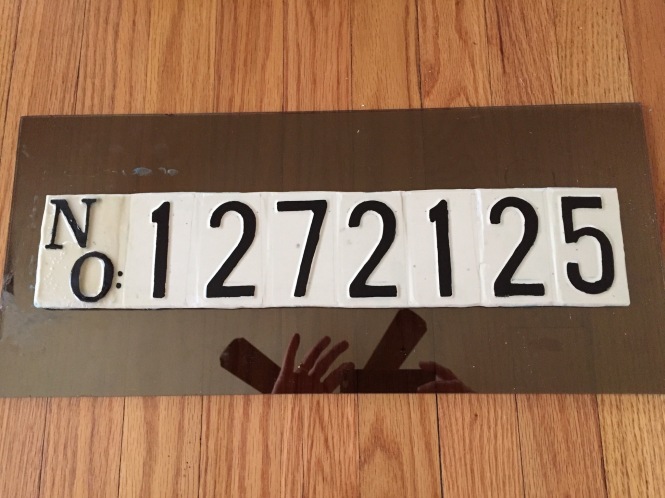 Probably, I will paint the background, to tidy up the appearance.

Having ordered new vinyl for Frank’s adopted hailing port of Corpus Christi, TX, I just need to remove Douglas IoM from the transom and apply the new one. Whilst she is in the water..

Remaining tasks include adding some compliance stickers in the boat, re-varnishing the flag pole and running up a new Stars & Stripes!

The previous owners have fought long and losing battles against leaks, which run down the sidewall of the read quarter cabin and make for damp sleeping. This is one of my next tasks.

Frank’s four previous owners have failed to cure the leaks in 30 years: is it an “undocumented feature” of the Sadler 34?

Despite being installed less than three years ago, the new engine mountings were rusting badly. They may have been installed unpainted, in the rush to get the re-fitted engine back into Frank before Endeavour (the business doing the refit) closed their doors. The original mountings had been in terrible shape, rotted through and broken in at least one case.

The new port side mountings were rusted worse than the starboard side, so I think that the situation was exacerbated when Frank was hauled out and stood on the hard at St Croix Marine. Tilted just a degree or two down at the stern and to port, sea water in the sump under the engine and in the shaft transmission space was topped-up by rainwater leaking into the sump.

So the port mountings stood in water from June until November, when I returned to St Croix and bailed out the sump.

The mountings are substantial, so will not fail for a good few years yet, but I put some Rustoleum (like Hammerite in the UK) on them. Not a pretty job, but the photos here belie the lack of space and limited access that I had. 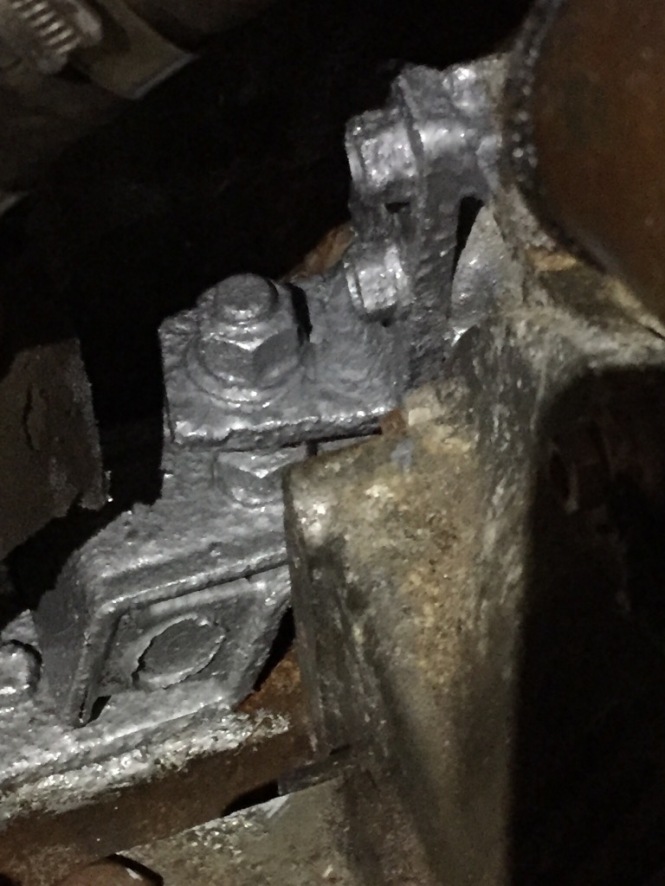 Whilst I was at it, I painted the rusty clamp that holds the shaft to the gearbox. If I find the correct term for it, I will edit this!

Somewhere along the way from Gosport to Corpus Christi, the door of the heads, which swings to also act as the door for the v-berth in the bow, swung off its hinges.

It probably happened on the first leg Gosport to Camariñas, which was replete with weather. I was stuck at the helm as the door slammed its way to and fro, until it finally exhulted in its freedom. In the loo.

So when I finally had a spare moment I stowed it up front with the other stuff, where it has languished until today.

The hinge is one of those “riser” or “gravity” hinges, like on a saloon swing door, so it has three positions and a tendency to stay in the middle position. However, the bottom hinge is in a “wet” place, by the heads shower bilge. So it corrodes. Especially as Frank ships sea and rain water through the anchor locker, forehatch, ports and from other as-yet unknown sources.

The door, newly-installed on its new bottom hinge

From the SSOA Forum, I had learned of a supplier of Centurion hinges, Door Handles Direct and today the heads door came top of the to-do list! I must admit that I bought the hinge set back in February 2016, and I only opened the parcel today. The hinge is not stainless steel, just brass-coated metal. So it will corrode again. I bought two pairs..

The old hinge bottom looks very similar to those that I bought, so sometime in Frank’s past, an owner has been through this. On removing the old hinge I could see that the door originally had a spigot inserted into the bottom edge, on which it would pivot. The spigot sat in a hole, which had been repaired a few times, and then the bottom setup was replaced with a new hinge – perhaps from the same supplier.

Here are some pics:

Hole in one’s boat: where the bottom hinge sat. Originally the door pivoted on a spigot that sat in the hole

Bottom of door. The hole is where the spigot would have been inserted. Remains of replacement spigot assembly, including nylon riser, are in place. Just.. 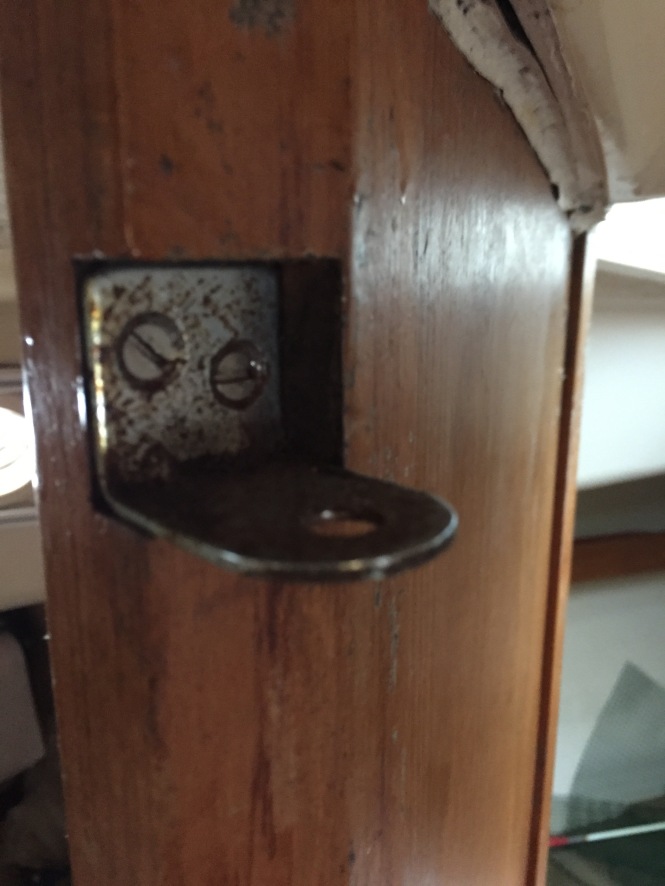 The top hinge: this works. The top spigot seems to be stainless steel.

I painted the hinges in Rustoleum, in the forlorn hope of holding the corrosion at bay.